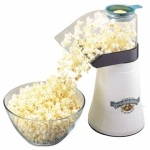 Mark Evanier’s recent post about Skinny Pop Popcorn reminded me of my own experience with homemade popcorn. My mother and I enjoyed many an episode of Remington Steele, Dark Shadows, and Star Trek: The Next Generation among other favorite shows while munching away on a bowl of fresh popcorn.

Popcorn cooked on the stovetop was the not-so-heart-healthy option we originally used.

We’d sometimes splurge on Jiffy Pop popcorn, which when you’re a kid was a night’s entertainment itself.

Professor von Jiffy Pop, who was later tried and convicted for war crimes, doesn’t tell you that trying to eat Jiffy Pop right out of the bag will turn the ends of your fingers into burned corn kernels.

I fondly recall my family’s mid-1980s purchase of Orville Redenbacher’s hot air popcorn popper. The butter that melted in the container as the popcorn cooked was delicious science in action. I also wore a chef’s outfit whenever making popcorn with the device.

I remember the claim of “virtually no unpopped kernels” being slightly less successful in practice. You’d also wind up with a few blackened pieces, but they still went down well with enough butter and “seasoning” (a salty spicy mixture that while advertised as not being salt still puckered your lips after a couple bites).

Tonight perhaps I’ll whip up some popcorn and watch a few episodes of Law & Order on Netflix.

Posted by Stephen Robinson on February 26, 2014 in Social Commentary