Ted Nugent, the man the GOP still loves to love 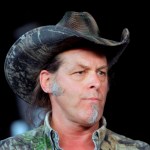 The GOP’s tepid repudiation of Ted Nugent’s racist statements about Barack Obama continue to fail what they used to refer to on Law and Order as the “laugh test.”

Nugent, in a recent interview with Guns.com, called Obama, the product of a biracial union, a “subhuman mongrel.” Because these disgusting comments were not about his sexuality and rationalized by his religious beliefs, his Republican friends sort of, kind of rejected them.

“Ted Nugent’s derogatory description of President Obama is offensive and has no place in politics. He should apologize,” the Kentucky Republican tweeted Thursday night.

OK, that’s something. I suppose they’ll sever ties with a race-baiting clod, right?

Sen. Ted Cruz (R-Texas) told CNN he disagreed with Nugent’s language but also didn’t rule out campaigning with him in the future.

“You’ve never heard me say such a thing and nor would I,” Cruz said. “I will note, there are reasons Ted Nugent – people listen to him, which is that he has been fighting passionately for Second Amendment rights.”

I suppose I’m not as encouraged as Sen. Cruz is by the thought of a racist who is a passionate supporter of gun rights.

Look, it’s not like this is a summer action movie and Nugent is the psychotic racist the hero has to recruit anyway because he’s the only one who can (PLOT DEVICE) the (PLOT DEVICE) before the (PLOT DEVICE). This is America. The GOP can surely locate another passionate fighter for the country’s right to self-destruct who isn’t a repugnant racist. Or at least isn’t a known one.

But if you thought Cruz was hard on Nugent, wait till Gov. Rick Perry gets a hold of him.

“That’s pretty tough words,” Perry said. “I wouldn’t have used those words. … I’m not going to get into this side of whether it’s appropriate or not. There are people who say things all the time. I mean, the idea that Ted Nugent said something that’s outrageous shouldn’t surprise anyone, he’s been saying outrageous things for a lot of years.”

Yes, Perry would have found more eloquent ways of impugning Obama’s heritage. And, gee, we already know Nugent is a bigoted jackass, so why are we complaining even if GOP politicians continue to embrace him?

And Perry really can’t take a stand on whether a clearly racist comment is appropriate? In fairness, people say (racist) “things” all the time, and Perry’s a busy man fighting gays and the Liberal War Against Religion.

After some pressure from Wolf Blitzer, Perry conceded that it was wrong to call the president a “mongrel.” Non-elected officials are apparently fair game. And just because a racist endorsed a GOP candidate for governor and will presumably continue his association with him is no reason to do something crazy like vote for the liberal woman.

“A comment by someone who has come in and endorsed him in the campaign I would suggest to you is not what this campaign is going to hinge upon, it’s going to be on Wendy Davis’s very liberal record,” Perry said. “I think this will be a news story or two and then we will get back to being focused on what the people of the state of Texas really care about.”

Posted by Stephen Robinson on February 20, 2014 in Political Theatre

If Clinton were elected, “effectively she would be Obama’s third and fourth term in office,” Bachmann said, calling Clinton “the godmother of Obamacare.”
But while Obama was “new and different,” Clinton is an old-timer who is less likely to excite voters, she said. Plus, she’s a woman, and she isn’t black, which Bachmann hinted is one of the reasons why people voted for Obama. “I think there was a cachet about having an African-American president because of guilt,” she said. “People don’t hold guilt for a woman.”

So, Bachmann thinks that people (presumably white people) voted for Obama because he’s black. It was guilt that drove them to elect Barack Obama over John McCain, whose vice presidential selection could have only been worse if it were Bachmann herself. This guilt also carried over to 2012.

Here’s a free clue for Bachmann: In the history of this country, racism and sexism have always trump any trace of guilt.

I consider Hillary Clinton eminently qualified to serve as president. I understand that many conservatives would disagree. However, if we’re considering her gender, I think it might behoove America to muster some excitement, throw on some pants, and finally arrive to a party attended by England, Germany, Argentina, Switzerland, Ireland, Finland, Lithuania, Costa Rica, Brazil, and South Korea that managed to elect a female head of state.

Of course, knowing America, if it ever did elect a female president, it would act as if it did it first — sort of like the history of rock and roll.

Posted by Stephen Robinson on February 20, 2014 in Political Theatre

My in-box this morning included an email from Zagat listing 15 “splurge-worthy” burgers. It was the usual suspects of conspicuous consumption. I enjoy “prime Wagyu rib-eye,” “short rib,” and “hangar steak,” which is why I don’t want them ground into a burger patty and fried. Also, putting a Maine lobster on top of a burger patty sounds like a great Man Vs. Food challenge but not really my idea of fine dining.

I don’t eat burgers often (I prefer my red meat intake in the form of a steaks and roasts), but when I do, and provided I’m in the right state, I enjoy In-And-Out and Five Guys. I won’t leap into the debate about the superiority of either. I find them distinct enough to make a comparison superfluous. However, what they have in common is simplicity, which is what I believe best serves a hamburger.

During my youth in Greenville, SC, my favorite places for a burger were one of the many Carolina Fine Food/Pete’s/Tic-Toc diners. The menu was always about the same — sometimes the fries were different. Pete’s had a series of identity crises — there was plain-old Pete’s, Original Pete’s, Pete’s Original, and Como’s Pete’s. There was also the more laidback Petee’s Drive-In. Anyway, no matter where you went, the burger came prepared one way, and there wasn’t any brie cheese of pepper jack or Tillamook but American cheese slices. I’m not a patriot but I support American cheese on a Southern burger.

When I was a senior in high school, my burger allegiance shifted to Bee Bee’s Drive-Thru. I regularly consumed the “Rush Limbaugh,” which was a double cheeseburger served with fries, onion rings, and sweet tea. This was Greenville, so I think the name was a tribute to the odious radio personality rather than a dig at his weight. I’ve enjoyed few burgers more. Even now, the special will only run you about $7. And the ketchup doesn’t come in a silver cup. That’s always a sign of trouble.

If you can’t handle Limbaugh even in effigy, and I don’t blame you, they also have great chicken fingers, which might sound like a slam at liberals, but are actually very good fried chicken breast strips.

Posted by Stephen Robinson on February 20, 2014 in Social Commentary