Presidential candidate Mitt Romney recently expressed his concern about what he perceives as a growing “entitlement” society:

“In an entitlement society, everyone receives the same or similar rewards, regardless of education, effort, and willingness to take risk. That which is earned by some is redistributed to the others. And the only people who truly enjoy any real rewards are those who do the redistributing—the government. The truth is that everyone may get the same rewards, but virtually everyone will be worse off.”

“Entitlement” has become a dirty word, but the word “entitle” actually appears in the Declaration of Independence. Thomas Jefferson argued that these rights were “self-evident” and granted by our “Creator,” but even if you aren’t religious, it seems clear that the American experiment is based on entitlement. If you’re not entitled to anything, then the world is essentially might makes right and Jefferson and his supporters would have had no moral position upon which to base their desired break with Britain.

But I digress — Romney’s statement also illustrates how distinctly differently he and I view the economic system in this country. His new stump speech has the typical conservative poor-bait: Poor people are stupid (“regardless of education”), lazy (“regardless of… effort”) and want to take what you have worked so hard to build (“same or similar rewards”).

I especially take issue with “willingness to take risk.” Who do you think Romney considers “risk takers”? I’d bet $10,000 of his money that he means entrepreneurs, small (and large) businessmen, and investors. That’s not an incorect description but it defines risk metaphorically — perhaps the loss of money or position — rather than literally — loss of life or limb. 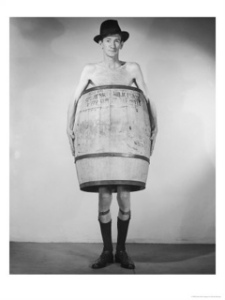 What every fashion-forward factory worker will wear in a Mitt Romney administration.

We need all these people in order for our society to function. Yet most made about a tenth of the $300,000 Newt Gingrich earned for offering his advice as a historian to Freddie Mac. So, if Romney wants to talk about risk, perhaps our discussion should start here.

When Romney talks about “that which is earned by some is redistributed to the others,” I’m sure that gets his supporters’ blood boiling. Man, those poor people again — sitting at home watching their big-screen TVs and cashing their welfare checks while honest Americans are at work. They probably don’t consider how Romney made his fortune. It’s all through investments. His private equity firm Bain Capital had stakes in Domino’s Pizza, Staples, and The Sports Authority, among others. Here’s how it works: The employees at these companies create a product, which generates revenue, which goes into the pockets of the investors.  Sounds like wealth redistribution to me. The workers are paid upfront for their efforts but don’t share in the wealth if the company does well. They merely are the first to share in the misfortune if the company does poorly. That’s hardly equal “risk” to folks like Romney. It’s about as much risk as a plantation owner determining which slave is the largest and most likely to work the hardest and longest before dying of exhaustion. This also sounds like the same retirement plan that Romney would offer the average American worker.

Romney claims that the only people who would benefit from wealth redistribution is the government. Wealth redistribution already exists, as part of the rigged game in which the CEO of “Dangerous Construction Company Unlimited” makes millions while the people actually doing the work barely get by. Romney rightly would fear government regulation because the average person has a direct stake in government. They can vote and steer policy so that the good of everyone is considered as opposed to the good of a few. Why would the American aristocracy support that? Romney’s policies, especially regarding the estate tax, would ensure that the current entitlement culture continues — the one in which his children and grandchildren, who have a blind trust valued between $70 to $100 million, could choose to never work a day in their lives… “regardless of their education, effort, and willingness to take risk.”

Of course, the larger question is that if an entlitement society existed in which everyone had equal rewards and equal outcomes… would that be so bad? OK, I know your socialist sense is tingling, but if you were a lawyer and made $250,000 a year, would it really bother you if a firefighter or construction worker made the same? Even half would greatly alter their lifestyles for the better.

Romney does not seem to argue from the position that such “wealth redistribution” flatly won’t work but rather that we should be offended on the face of it. He says “everyone would be worse off.” Really? Is he honestly concerned about a scenario where a sanitation worker is going to be paid less? Or he is worried about the American aristrocracy of which he is gold-card carrying member? Countless CEOs make enough — even as part of exit packages when they almost ruin their companies — to secure a comfortable living not just for themselves but for their grandchildren who don’t even exist yet. This happens while the “rank and file” employees (I’ve worked someplace where that term was used daily, generally to describe why they weren’t receiving a benefit my colleagues and I were) get by on pre-chewed peanuts.

The fatuous response is to say that this is simply how the market works, and the government cannot legislate “fairness.” However, public companies represent the interests of their shareholders (most of whom don’t work at the company) rather than the interests of all their employees. The board of directors are like pirates who loot the futures of their employees and share their bounty with each other and their closest subordinates. This is not capitalism. It’s theft.

So, when Romney presents himself as the president who will prevent the creation of an entitlement society, he’s engaging in a pathetic and craven sleight-of-hand to distract you from the one that already exists, the one that has slowly destroyed the U.S. middle class over the past 30 years, and the one that he is desperate to protect.