It’s not surprising that there’s an official Web site devoted to Mount Vernon, the home of first U.S. president George Washington. What is a little weird, though, is the pages that detail how Washington kept his more than 300 slaves in line.

In addition to having overseers monitoring work on site, George Washington utilized a number of methods to try to control the labor and behavior of the Mount Vernon slaves. Since work as a house servant or skilled laborer was viewed as higher-ranking than field work, Washington could threaten to demote an artisan who would be punished by becoming a field worker.

Violent coercive measures were used as well, including whippings and beatings. In some instances, physical restraints were utilized to ensure that slaves would not run away. When Tom, the slave foreman at River Farm, was sold in the West Indies in 1766 as a punishment for being “both a Rogue & Runaway,” Washington wrote to the ship’s captain to “keep him handcuffd till you get to Sea.”1

Although one houseguest noted in his journal that George Washington prohibited the use of whips on his slaves, evidence in the historical record proves otherwise.2 In 1758, Washington—while serving in the French and Indian War—received a letter from his farm manager explaining that he had “whipt” the carpenters when he “could see a fault.”3 In 1793, farm manager Anthony Whiting reported that he had “gave…a very good Whiping” with a hickory switch to the seamstress Charlotte. The manager admitted that he was “determined to lower Spirit or skin her Back.”4 George Washington replied that he considered the treatment of Charlotte to be “very proper” and that “if She, or any other of the Servants will not do their duty by fair means, or are impertinent, correction (as the only alternative) must be administered.”5 Washington instituted a system of review in order to determine when he deemed physical abuse as a punishment.

Well, this certainly stirs my enthusiasm for visiting the home of my ancestors’ oppressor. I’m sure any tours I take during my visit will focus on the unimaginable human tragedy rather than the deification of one of the nation’s founding fathers.

Posted by Stephen Robinson on June 29, 2013 in Political Theatre

Richard Matheson, who along with Charles Beaumont and series creator Rod Serling wrote most of the classic episodes of The Twilight Zone, died Sunday. My favorite Matheson Twilight Zone script is “The Invader,” which features an amazing pantomime performance by Agnes Moorehead (Bewitched).

A giant (forgive the pun) in science fiction, Matheson wrote “The Enemy Within” episode of Star Trek, which I’ve always enjoyed perhaps because it feels like an installment of The Twilight Zone.

My favorite Prince era is the Parade period. The music is mature and challenging (“Under the Cherry Moon,” “Venus de Milo,” “Do U Lie?”) yet still funky (“New Position,” “Mountains,” “Kiss,” “Anotherloverholenyohead,” and well shut all ready, damn!). I also adore (wait, that’s next year) the slick zoot-suited outfits he wore at the time. So, this clip, which you can view here, is quite a treat. It’s Prince’s 28th birthday concert in Detroit on June 7, 1986.

Enjoy it while it lasts. The famously litigious Prince actively stalks the Internet and removes any of his videos or concert footage. A shame because his live performances are stunning theater. When I saw him most recently — almost 25 years after this show, he hadn’t appeared to have slowed down much if any. That’s clean living for you, I guess. 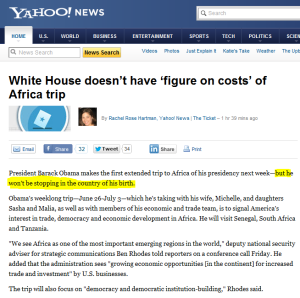 Yahoo!’s Rachel Rose Hartman revives the birther controversy by referring to Barack Obama’s “country of birth” and not meaning the United States. This was later updated to the slightly more accurate but still curious “ancestral homeland.” Ancestral homeland?

Oh, right, the place his absentee dad lived. I guess that means he has some innate connection to it, sort of like Superman and Krypton.

Posted by Stephen Robinson on June 21, 2013 in Political Theatre

Adam Richman (Man vs. Food) prepares the type of sandwich I used to eat before my third heart attack.

I do stand behind avocado on a sandwich but as a more healthful substitute for mayonnaise. Richman ventures into Elvis territory with the addition of a fried egg and bacon (unnecessary protein overload, I think). The potato chips are unconventional but if you’re going to eat them with your meal anyway, have at it.

My favorite sandwich from one of the best sandwich shops in the world, Parisi Bakery, was smoked mozzarella, sundried tomatoes, roasted red peppers, and very light mayo on seeded bread. When I started eating meat again in late 2001, I added smoked turkey to the mix. It was delicious but nap-inducing, which was problematic for a sandwich I regularly ate at lunch. 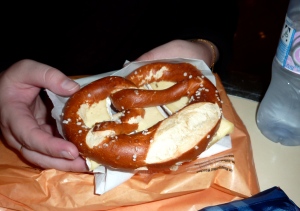 I’m more salads than sandwiches these days because I think most restaurants, especially in the Northwest, make their sandwiches too rich and heavy. If you need to eat it with a knife, fork, and pack of napkins, you have a problem. The gourmet sandwich craze isn’t for me.

There is an elegant efficiency to fresh bread and vegetables with a light touch of meat. I suppose that’s why the Germans do it so well. I left Bavaria singing the praises of pretzel bread.

It’s all about the voice…

The just-released Man of Steel film, which I don’t plan to see, has already generated speculation about who would play Lex Luthor in the now-likely sequel. Benedict Cumberbatch is a popular choice. He’s played a genius (Sherlock) and a superman of sorts (Star Trek Into… Really, That’s the Title?). But his most compelling credential is his voice. Put plainly: Lex Luthor is a baritone, which explains my two favorite Luthor performances.

And Anthony LaPaglia from All-Star Superman.

Sarah Palin is now back on FOX News, where her mission to avoid forming a coherent sentence can safely continue.

Palin and Fox News had parted ways this year, ending a three-year stint that reportedly paid $1 million a year. At the time, Palin said she wanted to do other things.

Palin was the 2008 Republican vice presidential nominee. Since leaving her TV stint, she has remained outspoken on issues, assisting GOP candidates and criticizing President Obama through posts on Facebook and her website.

I’m glad that Palin has used her fame and influence to do what pretty much any halfway literate conservative with an Internet connection can manage. Thanks to John Edwards, she’s not the most embarrassing former vice presidential candidate out there. However, the GOP mainstream tends to regard Palin, who was not invited to speak at the 2012 GOP convention, with the same contempt Superman held for the moll he hooked up with while evil in Superman III.

Sure, they built that… but what do they have to show for it?

Rick Santorum, discussing the GOP presidential loss last year, made a good point while missing a much larger one.

The former Pennsylvania senator recalled all the business owners who spoke at the Republican National Convention.

“One after another, they talked about the business they had built. But not a single—not a single —factory worker went out there,” Santorum told a few hundred conservative activists at an “after-hours session” of the Faith & Freedom Coalition conference in Washington. “Not a single janitor, waitress or person who worked in that company! We didn’t care about them. You know what? They built that company too! And we should have had them on that stage.”

Well, that would have proved at least as entertaining as Dirty Harry talking to an empty chair: “Hi, I’m a factory worker. As soon as they figure out how a machine can do my job or hire people in another country to do it for slave wages, I’m out of here… with no severance.” Or: “I’m a janitor, who apparently makes so much Newt Gingrich suggests that they give my job to my kid… who’s still in school.” And, of course: “I’m a waitress. I stand on my feet 10 hours a day just to keep my head above water. I have no health insurance, and I make so little, my retirement plan involves falling over into a customer’s steak and eggs.”

And I think their respective companies all had them sign strongly worded documents insisting that whatever they built or might someday build belongs to the company alone.

That’s nice, Rick, but none of your party’s policies makes any attempt to help them. Considering the GOP platform, here’s what would actually make sense:

“Hi, I’m a janitor. I barely make ends meet, but what are ya gonna do? What will really ruin things for my family is if gays could marry. Can you guys handle that?” Or: “I’m a factory worker whose plant is being shut down and its operations sent to China. However, that’s not the worst thing happening in America. Some women are getting abortions when their rapes weren’t legitimate!” And, of course: “I’m a waitress with this persistent cough that I should probably see a doctor about, but if I take time off, I won’t make rent. Anyway, I hear that illegal immigrants are going to take my cushy job!”

I didn’t watch the Tony Awards this year; although thanks to Mark Evanier, I saw Neil Patrick Harris’s sensation opening number.

Here’s a more subdued but still thrilling clip from the 1976 Tony Awards. Donna McKechnie wins Best Actress for her performance as Cassie in A Chorus Line. (Small thrill for me to notice Cheryl Clark, who played Liz in 1975’s Chicago, posting in the comments. She even refers to herself as “the original POP!”)

McKechnie defeated Gwen Verdon and Chita Rivera from Chicago, although the role of Velma Kelly would eventually win a Tony for Bebe Neuwirth’s performance in the 1996 revival. Here she is accepting the award from Mandy Patinkin, who is inexplicably wearing space-age sunglasses.

I just noticed that Tonya Pinkins was also nominated that year. I’d seen her in Play On! during the spring of 1997. She and the rest of the cast were great in a production that unfortunately did not live up to its title.